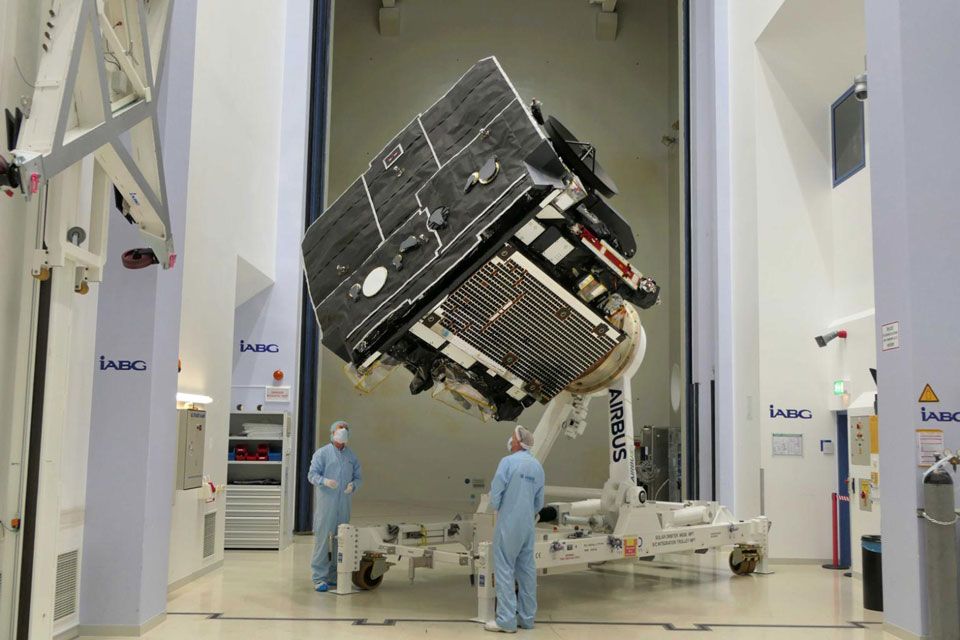 ESA's Solar Orbiter mission has completed its test campaign in Europe and is now being packed ready for its journey to Cape Canaveral at the end of this month, ahead of launch in February 2020.

The spacecraft was on display today for the final time in Europe, at the IABG test centre near Munich, Germany. It was built at Airbus Stevenage, UK, and has spent the last year at IABG undergoing essential testing such as checking deployment mechanisms, and that it can withstand the vibrations of launch, and the thermal extremes and vacuum of space. It has now been declared ready for shipment to the launch site and will travel an Antonov cargo plane on 31 October 2019.

Prisma Electronics is glad to announce the successful completion of the project “Miscellaneous EGSE” for the ESA mission “Solar Orbiter”. The engagement of Prisma Electronics was in the manufacturing of complex cables and harnesses and equipment under Space requirements, used for the testing of the satellite.

The total budget of the project concluded in over 1M €, thus making it one of the key manufacturing Space projects for Greece. All the deliverables were successfully accepted by the Prime Company, AIRBUS Defence & Space. The participation of the Company in the project was considered a complete success, given the “Letter of Commendation” of AIRBUS DS to Prisma, which acknowledged both the on-time and the excellent quality of the deliverables.

Mr. George Giordamlis, President of the Board of the Company stated, “Following the corporate strategic planning, the Company has been investing systematically last years in both personnel and equipment, in order to be established as a reliable supplier for Electronics and Cables for critical-mission projects. Towards this direction, we have made a lot of steps with great effort and persistence. Today, is an important day for all the Company, especially for the personnel, to which we owe our progress so far. We now anticipate the launch of the mission to celebrate our small contribution to a greater purpose.”

The Solar Orbiter mission is one of the flagship missions of ESA. The satellite will try to give answers to some of the most fundamental questions of the universe, such as the creation of planets, the forming of life and the laws of Physics, which apply between celestial objects.

Once launched it will follow an elliptical path around the Sun, at its closest bringing it within the orbit of Mercury, just 42 million kilometres from the Sun. As such, Sun-facing parts of the spacecraft have to withstand temperatures of more than 500°C – due to solar radiation thirteen times more intense than for Earth-orbiting satellites – while other parts remain in shadow at -180°C.

The mission is essential to learn more about the Sun-Earth connection. We live inside a giant bubble of plasma generated by the Sun that surrounds the entire Solar System, within which we are prey to space weather.

The mission is essential to learn more about the Sun-Earth connection. We live inside a giant bubble of plasma generated by the Sun that surrounds the entire Solar System, within which we are prey to space weather. Solar Orbiter will provide a deeper understanding as to how activity on the Sun is linked to these solar storms, which can disrupt electrical systems, satellite communications, GPS, and create higher doses of radiation for polar flights and astronauts "Solar Orbiter is set for answering some of the biggest scientific questions about our star, and its data will help us to better protect our planet from the global challenges of space weather," says Günther Hasinger, ESA Director of Science.

Solar Orbiter will launch on a NASA-provided Atlas V 411. The launch is currently scheduled in the early hours of 6 February 2020 (UTC).